Vantage a massive success despite widespread criticism of creative approach 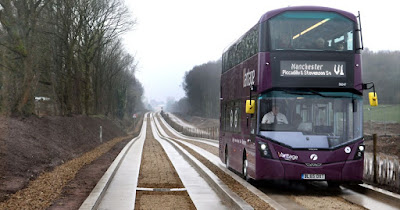 I wrote this article a number of months ago (so the figures may be slightly out by now) but forgot to post it, so here goes...

Back in April 2015, First launched the Vantage service on the Leigh to Manchester busway, and it's fair to say that opinion on the livery was somewhat one-sided.

Most industry people had a negative opinion on it - too bland, too boring, not exciting enough to entice passengers on board.

So let's look at some figures flying around the internet to see how much impact the lack of design had. Within six weeks the service had just over 4,000 passengers a day, and within six months this figure had increased to over 6,000.

Five more Vantage vehicles were planned for introduction in January, and one can only assume this was due to an increase in demand.

And an increase in demand, especially after two years, usually indicates things are going pretty well.

So how important was the livery to customers when tempting them on board?

I've no doubt there are some potential bus customers who can be influenced by the aesthetics of a branding exercise, especially on routes where tourists/visitors are a key market - the Purbeck Breezer around Poole and Swanage being a prime example. But people who choose a new service as a transport solution based on what it looks like are, for me, the minority.

The majority try it because of the promises made in the (great) advertising and continue to use it after realising those promises can be delivered. The first users of Vantage would have been those who used the services it replaced. After a while, they would have noticed the journey was quicker - thanks to the new infrastructure, the ride was smoother - thanks to the new buses, and the overall experience was better than they are used to - thanks to the significant financial investment.

And subsequently, they tell work colleagues, neighbours and friends, so word spreads about the service's performance (not forgetting the power of social media to get that praise across a little quicker), and the passenger growth begins.

As much as we like to think a livery can have a real influence on a service's success, consistently delivering on promises is likely to be more important to the average man on the street.