IKEA ask if you really meant to click their banner ad?

on February 14, 2017
Let's be honest here and admit that almost no one clicks a banner ad on purpose (despite brands investing millions in the pesky things).

And in IKEA's latest digital work, they take an honest look at banner advertising and basically admit that lots of people suffer from 'fat finger' syndrome and click them by mistake. 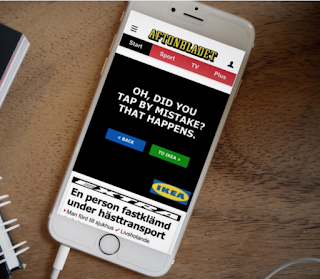 So when you click on an IKEA banner ad, the retailer will openly ask you to confirm if you really meant to do so. A pretty honest approach but one that fits nicely with their values.

Creative director of their ad agency, Magnus Jakobsson, says “Who doesn’t click these things 24/7 by mistake? No one. If you’re inspired by people’s everyday lives, you need to acknowledge that, even in banners,”

“When your business idea is to make people’s everyday lives a little better, you wouldn’t like to annoy them unknowingly. But mobile banner ads do! With these perceptive banners, IKEA found a way to acknowledge that” adds copywriter Mark Ardelius.

It’s a pretty clever idea that should lead to some goodwill among the audience, if only by offering the very relatable message that banner advertising is pretty annoying.