we rebrand buses in Cambridge 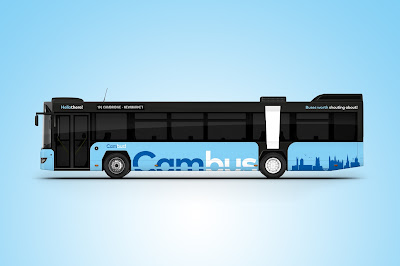 As a recognisable brand, Cambus lasted little more than 11 years and was absorbed into Stagecoach nearly 21 years ago, but we have focused on how the company could come back to life as a forward thinking organisation geared to the needs of this economically vibrant part of the east of England.
Cambus was a creation of the 1980s when the National Bus Company split most of the companies in its southern region into smaller, more locally managed businesses.

One of the huge myths of the past 30 years is that this was a preparation for privatisation. It was not. Otherwise, the northern companies would also have been divided into smaller businesses at the same time. But a byproduct was that it was easier to sell these smaller companies to their managers and seven of the first 12 NBC subsidiaries sold in 1986 were split up southern ones.

The 12th of these was Cambus, sold to its management for £1.5million, half the book value of its assets. It was created in September 1984 when Eastern Counties was divided in three. The original company retained the bus operations in Norfolk and Suffolk, while all the coaches passed to newly created Ambassador Travel. Cambus, with head office in Cambridge, took over bus operations from garages in Cambridge, Newmarket, Ely, Peterborough and March.

In place of NBC corporate poppy red and white, buses were painted Cambridge blue and cream, a light blue shade more eye-catching than practical. When the management team bought the business in December 1986 and created Cambus Holdings Ltd (CHL), the livery was modified with the addition of dark blue lower panels and more cream.

In September 1989, the Peterborough and March operations transferred to CHL’s new Viscount Bus & Coach Company with a livery of yellow and white with blue and grey stripes. Stagecoach acquired CHL in December 1995, triggering the end of the Cambus and Viscount identities, but for this latest ‘what if?’ scenario we imagine that Cambus had remained independent and give it an identity for the late 2010s.

The evolution of this Cambus branding pays homage to its incumbent in style but has developed its own refreshing attitude. Just the colour itself makes the product exciting. Gone is the two-tone blue, replaced with a vibrant, modern single flat colour.

Despite the transition from uppercase to title case, the updated logo retains a real link to a bygone era with the simple cut-through line. Although a subtle visual representation of the River Cam, it adds real gravitas to the execution and draws the eye accordingly.

The livery shows a real pride in the area its serves through the Cambridge skyline silhouette, making it instantly recognisable as a bus service that is proud to serve its local community. The real triumph in this particular livery is the way a simple exclamation mark has been used to portray the brand’s new-found confidence. Notice how the main identity on the body sits slightly below where it normally would, ensuring it ties in nicely with the rear wheel to provide the correct punctuation — thus creating the perfect oversized exclamation mark.

It’s the little touches that make all the difference. With all the subtle and not-so-subtle changes, Cambus has come of age where the brand provides ‘buses worth shouting about!’