was the Protein World furore well planned or just luck?

on May 07, 2015
The advertising world has come to the eyes of the British public over the last week or so, thanks to a campaign on the London Underground.

The work, seen below, is for the Protein World - a provider of fitness/health supplements - and has generated over 350 complaints to the Advertising Standards Authority (ASA) as well as 45,000 online signatures calling for it to be banned. 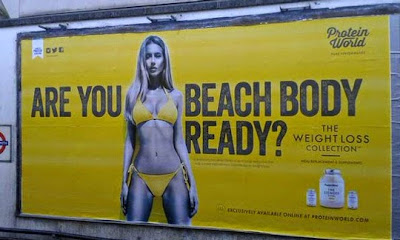 So with so many people taking offence to it, you could argue that ad hasn't been very successful. If people don't like it, then it hasn't worked right? Well if you are judging directly against return on investment through sales increase, you couldn't be more wrong.

In the five days after the story about posters broke, Protein World saw sales jump by a massive £1m (since upped to £2m), with the whole campaign estimated to cost no more than £250,000. That's one happy finance director.

So was people's reaction to the campaign something they envisaged it or did they just get lucky with people taking to the streets in protest? Did they really believe an attractive lady in a bikini flogging protein powder would cause such a stir? I doubt it.

In the ad's simplest form, the message is 'buy our product and you could look like this' which admittedly (without hard work, discipline, exercise and good genetics) is a highly unlikely claim. Yet there is nothing overly outrageous about the ad's concept, copy, or execution.

What they have succeeded is doing is turning a negative reaction by a small minority (and the media) who were never likely to be customers of the brand, into a positive one for those that are. Protein World have shown themselves to be a company who weren't prepared to play the traditional apology PR game when things got a little sticky.

Richard Staveley, the company’s head of marketing, was quoted as saying: “It’s been quite odd how many people we’ve found who are far quicker to fit shame then fat shame. And, you know, if that makes us bad, then so be it.”
If you've got the balls to do it, you get the kudos when things pay off.