the bus campaign that got people hot under the collar

on May 12, 2015
So after a few days away I've come back to something I never thought I would see - a bus company's advertising being talked about in the national press.

New Adventure Travel, a 'South Wales based coach hire and land transport solutions provider' decided that the best way to promote all day travel on their new X1 service was by getting a little tongue in cheek.

And according to them, the best way to get it noticed was to have topless (male and female) models on the back the new buses holding a sign with the message 'Ride me all day for £3'. 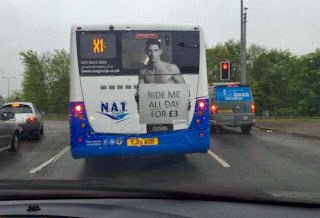 Well, if was attention they were after, they've certainly achieved it. Twitter went a bit mental, and the kick off was subsequently picked up by the national press.

The company's reaction was in stark contrast to that of Protein World as they decided an apology was the best form of defence. “Firstly we have stated that our objectives have been to make catching the bus attractive to the younger generation. We therefore developed an internal advertising campaign featuring males and females to hold boards to promote the cost of our daily tickets. 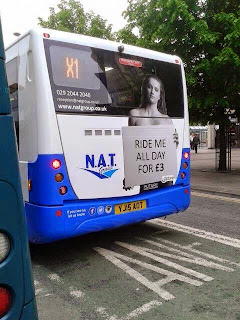 “The slogan of ‘ride me all day for £3’ whilst being a little tongue in cheek was in no way intended to cause offence to either men or women and, if the advert has done so then we apologise unreservedly. There has certainly been no intention to objectify either men or women.

“Given the volume of negativity received we have decided to remove the pictures from the back of the buses within the next 24 hours.”

I've got a bit of sympathy with NAT's approach. They were trying to appeal to a particular market, who one could argue, would be familiar with a risque approach to marketing but the media choice was misguided. The back of a bus is seen by the world and his wife, but the back of a nightclub toilet door would be a different kettle of fish entirely.

Maybe I should go away more often if bus advertising gets in the news when I do.