on March 26, 2014
The VW Beetle ads from the 60s are said to have started the creative revolution.

In an age of campaigns that glorified a car's size, power, and prestige, 1960s Volkswagen Beetle advertising was the calm voice for a different set of values. Plus, it made you smile. The understated style was introduced by New York ad agency Doyle Dane Bernbach. 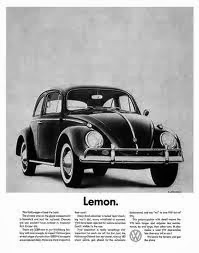 The agency's approach was to poke fun at their product because consumers had been poking fun at it. But thanks to the ads, those who had poked fun at it began buying it and Beetle sales soared.

Many would assume that that to write such effective ads, the team working on them must have had some long, hard, complicated discussions. Maybe so, but the solution was far from it.

Bob Levenson, who worked on the campaign for a number of years, was asked how he wrote copy said 'I always started by writing Dear Charlie, like writing to a friend. And then I would say what I had to say, and at the end I would cross our Dear Charlie, and I was all right.'


Remember we are not scientists, and when we are talking to humans we should try to be human ourselves.