does your brand 'do' spontaneous? 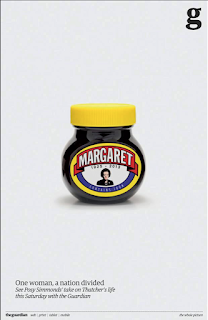 Some of the best things in life aren't planned, aren't part of a long-term strategy, they're just done with a spontaneous excitement.

The ad on the right from The Guardian is one such example.

Raising awareness of the paper's soon-to-be-published look at Mrs T's life, it's a simple representation of the effect her time at Number 10 had on the general public - people either loving her or hating her.

Yet the real point is the way the paper reacted to what was happening around them to do such a great piece of topical work with such a speedy turn around. From concept board to print in 48 hours, reactionary not planned.

How many of you can say you've done that? Reacted to something that was happening in your environment and quickly produced a piece of relevant, on-brand communication.

Virgin Trains did it a while ago with reference to Robbie Keane's short stay at Liverpool FC but apart from that I'm struggling.

The ash cloud in 2010 was a perfect opportunity for long distance TOCs and the likes of Eurostar to go on the offensive and take advantage of the competitions' misfortune. Did they do it? Not that I saw.

Maybe being spontaneous didn't fit in their strategy.