South West Trains and an act of God 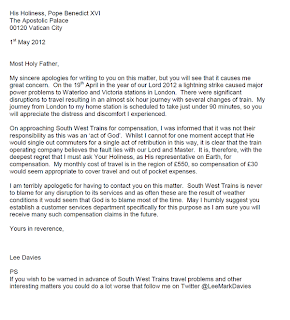 If lightening delays your journey home there's still one man you can turn to for compensation.

When a lightening strike hit London last month and caused major disruption on the capital's train network, Lee Davies knew that his trip home may be disrupted. What he hadn't contemplated was that his usual 90 minute journey with South West Trains would end up taking nearly six hours.

So with the longer than anticipated delay in mind, he approached South West Trains with a view to claiming compensation.

Unfortunately for him the company (quite rightly) cited that it was an act of God, and his claim was turned down.

Not be be deterred, Lee took his claim to someone 'higher' and wrote this rather well scripted and humorous letter. Click on the image to read without the aid of a magnifying glass.

No word as yet to whether his perseverance paid off.