on November 30, 2011
There's a well know ad agency boss in America who has just had his book jump to the top of Amazon's eBook best sellers list.

To an outsider it seems his overnight success came through the power of social media. With that in mind, here's 10 steps to how he became an overnight social media success. 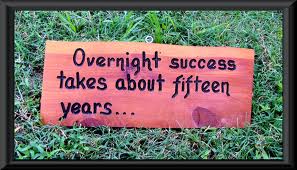 1. First he wrote and published a book. This took him a couple of years.

3. Then he spent virtually every Saturday morning for five years roughing out ideas for his blog posts.

4. For almost five years he spent at least two hours a day -- usually in the middle of the night -- writing his blog.

5. He also spent at least an hour every day scouring online and offline sources for blog post ideas.

6. He wrote several articles for trade publications sticking to his particular point of view.

7. As a result, he developed a nice body of subscribers for his blog. He tries to keep it fresh, entertaining, and controversial to attract non-subscribers every day.

8. Although he has several thousand Twitter followers, he acts to maintain credibility by only tweeting about the blog when there is something he believes is unusually interesting in it.

9. To develop credibility among readers, he never uses his blog to promote his agency.

10. In order to raise awareness of his book and blog he has travelled frequently to do speaking engagements and never accepted money.

And that's how this guy became an overnight success through the power of social media.

So next time you expect similar results from that 'Twitter and Facebook thing' I suggest you take a step back and read this post a couple of times.

A quick fix is rarely a lasting one, a long term strategy often is.