think businessmen take the train so they can get more work done? think again... 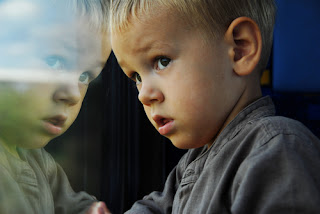 The image of business executives beavering away on their computers and mobile phones while travelling by train is a myth, official research has found.

Rather than use their time on board to catch up on work, most businessmen and women while away the hours staring at other passengers and gazing out of the window at the countryside.

The reality of how they spend their time on board trains was contained in evidence submitted by the Department for Transport to a parliamentary inquiry into plans for a high speed rail network.

Oxera, a firm of consultants called in by the DfT, found that as little as 10 per cent of journey time could be productive.

“In fact, more business travellers spent most of their travel time reading for leisure, gazing out of the window or “people-watching” than spent it working,” the study found.According to the Oxera study this has had little or no impact on the behaviour of business passengers who often pay huge amounts to travel by rail.

But even now connectivity is patchy and even Philip Hammond, the Transport Secretary, is understood to be frustrated by the problems he faces making calls or dealing with emails while travelling by train.

Another study, by the University of the West of England, came to similar conclusions.

It found that 46 per cent of business passengers stared at the countryside or at others on board the train, while 43 per cent just read for leisure.

Just over half did spend some time working, but then more than one in 10 admitted they were either bored or spent part of the trip snoozing.

A first class ticket from London to Manchester can cost as much as £199.50 for a journey lasting just over two hours.

Estimates of how much a business executive’s time vary. According to Mark Cameron, a City headhunter, a figure of £80 to £150 an hour is not unreasonable.

The findings were seized upon by Simon Buck, chief executive of the British Air Transport Association.

“Maybe they are just dreaming about how much of their income tax goes toward the £5 billion public subsidy rail receives from the Government every year.”

But a spokesman for the Association of Train Operating Companies defended the value of travelling by rail.

“Travelling by train offers business passengers the choice to wind down with a glass of wine and take in the scenery, or make the most of Wi-Fi access to get some work done – not things that you can always do on a plane.

"The city central locations of most train stations also makes getting to and from appointments quicker and more convenient, rather than wasting valuable time in lengthy airport queues.

“The fact is that more and more businesses are choosing to send their staff by train – so they must be confident that their time is being used productively.”

Article taken from The Telegraph