Jedward help do the business for East Midlands Trains

on February 23, 2011
East Midlands Trains walked away from the recent Rail Business
Awards with a smile on their face - after a little help from Jedward. 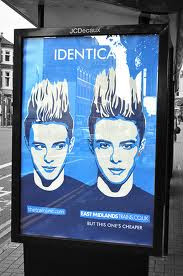 The Stagecoach owned company who are based in Derby, won the Information Technology Excellence award for their Best Fare Finder tool, to sit alongside highly commended awards for the launch of its megabusplus.com service and for the work it has been doing to improve safety among its drivers.

A marketing campaign (shown opposite), which used X-Factor twins Jedward to communicate messages about its fares, was also highly commended.

TOCs who are willing to do something different to raise awareness of their products are few and far between. East Midland, with what would have been a considerable investment to secure the services of the Irish brothers, have shown themselves willing to split from from pack.

Add promotions like their Red Dot Day to a simple yet striking visual style  - and it's not hard to see why they are near the top of their marketing tree.