the golden age of rail advertising 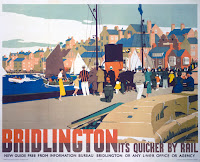 The glorious golden age of railway advertising is celebrated in an exhibition of posters at the National Railway Museum in York.

Train travel was instrumental to the development of the Great British seaside holiday because when the railway network reached costal resorts, it meant that it could take huge amounts of workers on holiday and by the end of the Thirties, 15 milion people were getting to the seaside by rail.

Each different regional railway company would promote its services by producing memorable posters to make the resorts, and sometimes holiday camps, look appealing and attract as many visitors as possible.

Many of them featured pretty bathing belles; others, featured sophisticated couples who seem to have come straight from the Hollywood silver screen. Blackpool in particular benefited from the growth of the railways as early as 1846, when a new branch line arrived in the town.

It made it easier for the thousands of holidaymakers from the Lancashire cotton mills to come for their annual Wakes Week break, when each town’s mills would close for a different week. By the start of the last century tourism meant that Blackpool was the only resort in Britain with three piers, and it also boasted the largest opera house outside London.

Sure beats what most rail companies do these days - too many messages and not enough benefits. See a range of the posters on display here.