naughty nurses do it on the bus 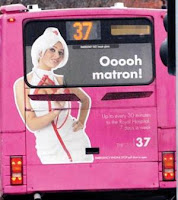 Diamond Buses, who are without doubt one of the most progressive bus companies around, have caused a stink with the marketing of a route serving Worcestershire Royal Hospital.

The campaign in question uses a provocative looking woman dressed as a nurse (I doubt she's fully qualified though) alongside the words 'ooh Matron'. Unsurprisingly the creative execution has annoyed many who feel the image demeans and devalues nurses while portraying them in a stereotypically sexual way

Diamond Buses obviously see it slightly differently, commenting “The advert is simply to provide a message that we provide a transport service into the hospital, a place which has its own parking issues and put a smile on people’s faces. Public transport has been seen as a boring alternative to the car for too long and we want to encourage existing and new people to use our services which in turn will reduce pollution and congestion in the city.”

While I whole-heartedly support those trying to market public transport differently, I think the guys at Diamond could have executed the idea a lot better.

However, with the associated PR the story has generated in the area, they may well be the ones left with a smile on their faces.