it's not only us designers that can't spell! 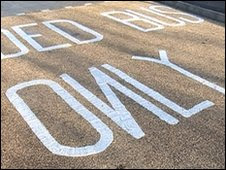 The ill-fated Cambridgeshire guided busway has had another setback after a road sign was painted incorrectly.

The handover and opening of the St Ives to Cambridge route has been repeatedly put back and is unlikely to happen until 2010.

A workman, working for the contractor, painting white Guided Bus Only signs in the road in preparation for the busway has written the "N" back to front.

The busway was expected to be completed in November but more work was needed.

A Cambridgeshire County Council spokesman said the contractor was "already aware of this mistake and will be putting it right".