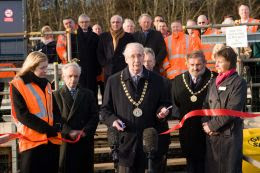 A temporary railway station at Workington in Cumbria has opened after the town was cut in two by severe flooding.

The station was built in just six days after floods washed away bridges and damaged others.

The new shuttle train service between Workington and Maryport is to run every weekday from Monday 30 November to provide further help to residents in West Cumbria following the recent severe floods.

It will call at Maryport, Flimby, the new temporary station on the north side of Worrkington, called Workington North, and Workington.

The shuttle train will have three carriages and will be operated by Cumbrian rail company DRS on behalf of Northern Rail.