Scrap your car and get a free bus pass! 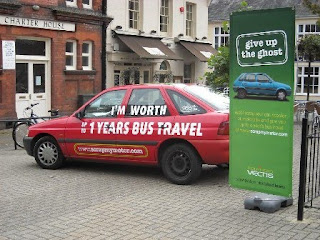 An Isle of Wight bus company is starting its own car scrappage scheme.

Southern Vectis is offering either a six-month or one-year travel pass worth up to £720 to people who hand in their old car, scooter, moped or van with a current MOT certificate.

The firm said the scheme was aimed at people thinking of getting rid of a second vehicle due to the recession.

It hopes other operators will adopt the plan in a bid to "remove cheap cars from the local market and ensure a switch from car to bus".

Marc Morgan Huws, Southern Vectis commercial and operations manager, said: "I was mulling over ways of getting people out of their cars in a real but imaginative way.

"The government-funded car scrappage is a scheme that does nothing to tackle the fact that we have to encourage people to use their cars less.

"We know that if we get people to use buses they tend to switch for the long-term. The problem is how we get them to switch in the first place." 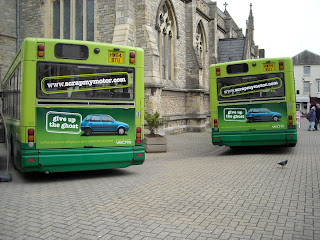 Conditions of the initiative, called the Really Green Car Scrappage Scheme, include the vehicle being in a driveable condition and being registered to the person who gets the free travel pass.

"Many families feel the need for one car, but the second one is a marginal purchase, often something cheap and cheerful," Mr Morgan Huws added.

"The costs are often overlooked until it's time to tax, MOT or insure the car.

"We know that in the current economic climate, and with big job losses on the island people will question the cost of a second car."

A really good idea, that is sure to get loads of PR. Check out the website at www.scrapmymotor.com