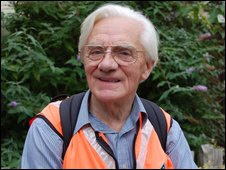 A retired maths teacher has travelled the length of England using his free bus pass - at the second attempt.

David Bird, 80, of Throckley, Newcastle, was forced to abandon a trip from Cornwall to Northumberland last month when he lost his mobile phone.

He has now used the bus network to travel in the opposite direction from the border north of Berwick to Land's End - more than 500 miles.

The pensioner finished in three days, 14 hours and 34 minutes on Thursday.

Mr Bird said: "I completed the trip using fewer than 30 buses and in what I believe is a record time.

"It is a great sense of achievement, especially considering I was forced to abandon the last effort."

He was inspired to make the trip after reading a BBC story about how over-60s could cross the country for free on the bus network.

The former teacher, who was travelling with a folding bike to allow him to travel to overnight accommodation, returned to the North East by train.