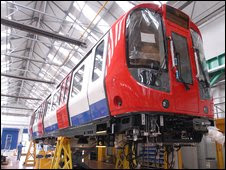 The Tube's first air-conditioned train has arrived at a depot in north-west London ahead of its introduction next year.

Air-conditioned trains - known as "S" Stock - will be used on the Metropolitan line from September 2010 and are longer, increasing capacity by nearly 20%.

By 2011, 58 air-conditioned trains will have replaced the existing rolling stock on the Metropolitan line.

The trains will then be rolled out on to the District and Circle lines by 2015.

The first air-conditioned train is housed at a depot in north-west London.

London Underground is trying to develop methods of installing air-conditioning in the network's deeper routes - such as parts of the Bakerloo, Northern and Piccadilly lines - which get the hottest.

Mayor Boris Johnson said the train was the "next milestone in the rebuilding of our transport system".

In the next year, Transport for London (TfL) hopes to complete several key projects, including the £1.4bn extension of the East London line and the upgrade of the Jubilee line, which will increase capacity on that line by a third.

TfL is also looking to make efficiency savings of more than £5bn by 2018.

The Tube began service in 1863, making it the oldest underground railway network in the world.