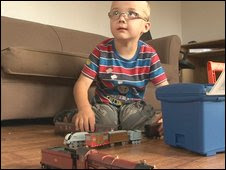 The parents of a boy who has run away to try to catch a train have asked railway staff to put up warning posters to stop him getting into danger.

Four-year-old Toby Friend has even tried to buy a ticket at the station near his house in mid-Kent.

He has climbed his back garden fence and crossed two main roads 15 times in his effort to reach the station.

"He just loves the train so much... he thinks he can go on his own," said his mother, Kirstie Field.

"He just loves adventure. We don't drive, so apart from the occasional bus, train is our only transport.

"The first time he actually managed to get on a train and asked for a ticket," she said.

"Luckily the train guard didn't leave the station, but there's always that worry that he's going to get on a train and not ask for a ticket, and just go and sit down, and the train just leaves as normal."