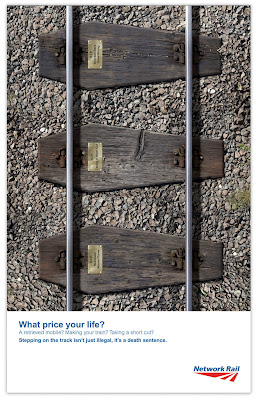 A poster campaign designed by Aqueduct for Network Rail was launched at train stations nationwide this week.

The posters feature railway sleepers that have been replaced by coffins and RIP messages to help reduce adult trespass accidents.

Aqueduct said "It looks set to cause a public outcry, but also awareness and recognition of a highly effective campaign."

Not sure about the "public outcry" but they're nicely done. Although I can't help thinking they could be more 'in yer face'. By cutting out the first two lines of copy, which is already explained or contained in the image and removing the corporate white band at the bottom (guidelines permitting of course) it could really be made darker and more serious.

The posters are being used to pave the way for Network Rail’s summer ‘No Messin’ Live’ campaign fronted by boxing champion Amir Khan.