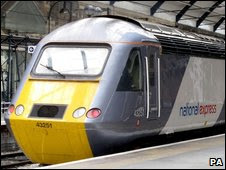 The rail franchise system is "a muddle" which allows train companies to "take advantage" of passengers and needs reform, a report by MPs has warned.

The Commons transport committee said operators were making profits in good times but forcing the government to step in when revenues fall.

And they charged "unacceptable" fare rises of up to 11% above inflation.

The MPs urged the government to run East Coast trains itself.

They said nationalisation could be a way of comparing the performance of the public and private sectors.

The report found operators had exploited a loophole to charge "unacceptable" fare rises.

Passengers had to go to "extraordinary lengths" to get cheap fares and that fares had risen out of all proportion to the rest of the economy, it said.

Tighter rules will now tie all prices to inflation plus 1% - resulting in cheaper fares by next January.

The committee's Labour chairwoman Louise Ellman said: "The fare rises we saw this year were excessive.

"Companies cream off profits in good times, but leave passengers to pick up the bill when hard times hit."

The report found the current structure had allowed rail operators to hike-up prices at the worst possible moment.

But Mrs Ellman said the price formula that allowed companies to take advantage in 2009 would remain in 2010 - when changed economic conditions should have the opposite effect.