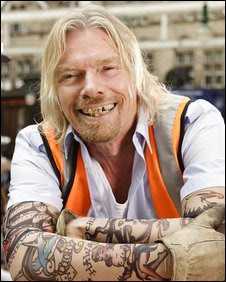 Sir Richard Branson has been accused of patronising rail staff after dressing as a station cleaner for a TV advert.

The billionaire Virgin boss appears with forearms covered with fake tattoos and blacked-out teeth as he empties bins at Glasgow's Central Station.

The RMT rail union said it demonstrated a patronising attitude to staff who had worked hard to make him a fortune.

Sir Richard insisted the advert showed how proud he was of Virgin Trains employees.

In the advert, designed to promote improvements to the West Coast line, Sir Richard wears a bright orange fluorescent jacket, heavy boots and is seen driving a refuse cart through the station.

RMT General Secretary Bob Crow commented: "Richard Branson treating the hard-working rail employees, who have earned him a fortune in recent years, as some sort of excuse for getting out the fancy dress box is patronising in the extreme.

"The blacked-out teeth and fake tattoos say a lot about the attitude of Virgin Trains to our members who work under enormous pressure to make the services tick."

Sir Richard said the advert showed his appreciation of his workforce.

"I am so proud of all of our Virgin Train people and if dressing up in disgustingly dirty clothes, having my teeth blacked out and getting covered in tattoos was what it took to provide it, I was delighted to oblige," he said