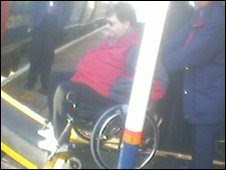 Below is an article and a video (click here) by the BBC which followed a wheelchair user travelling by train in the South.

It makes for pretty uncomfortable viewing. As an able-bodied person you don't appreciate how difficult even the most simple journeys can be, when using the public transport.

It must be tough for the train companies though, as many of the smaller and older Victorian stations are not accessible and would cost millions to improve. And I thought taking my daughter out in her pushchair was a nightmare! (sorry Daisy)

Secret filming by BBC South has shown the difficulties faced by wheelchair users when using trains in the region.

Mark Greenwood made test journeys, including a trip from Liphook station which meant a 40-minute detour as there is no access to his required platform.

Only one in five stations run by South West Trains (SWT) on the Waterloo line is fully accessible.

SWT said it was not required to invest in better access, but facilities were being improved at 21 stations.

Paul Bentley, from SWT, said: "Under the terms of our franchise we are not required to undertake major investments in stations.

"But there is an access-for-all programme funded by the Department for Transport which is providing level access at 21 of our stations over the next five years or so."

BBC South followed Mr Greenwood, who lives in Liphook, Hampshire, as he tried to travel south.

"The nearest platform is northbound. The southbound one, which is where I am trying to go, is over a steep bridge."

There is no access over the bridge so he was forced to take a train in the wrong direction to Haslemere where the station has lifts - adding 40 minutes to his journey.

At Brockenhurst station, the only way out is to cross the track.

"The trouble is these stations were never built for it," Mr Greenwood said.

"The staff could not be more helpful, they are very caring, but the facilities make it very difficult."

In 1995 the Disability Discrimination Act was brought in to improve access for disabled people who use public transport.

Nikki Haswell, from Disability Wessex, said: "I think that given the act came in 14 years ago, it is worrying that only one in five stations on the Waterloo line are currently fully accessible."